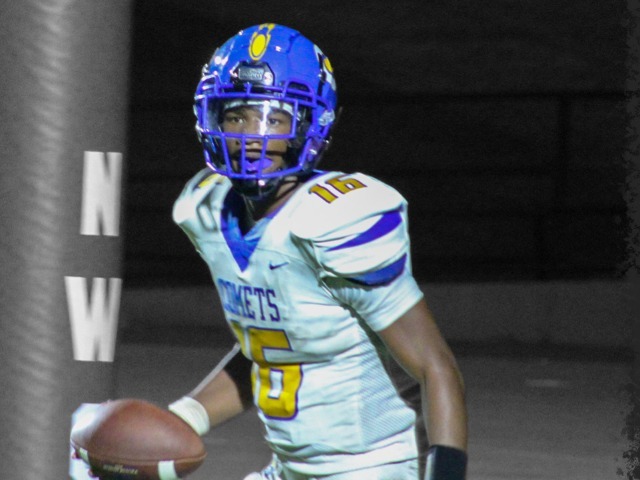 OKLAHOMA CITY – In the third edition of the MetroTech OKCPS Game of the Week this season, it was the “Classen Bowl” stealing the spotlight on Friday night as Northwest Classen hosted Classen SAS at Taft Stadium for their annual tout.

Both offenses were clicking the entire evening as the teams combined to score 45 points in an exciting shootout for fans in attendance. A game-winning interception by the Comets’ Elijah Green secured the 24-21 victory for Classen SAS.

Classen SAS came right back on the next possession and found the endzone when freshman QB Carlos Hardeman connected with senior wideout Jailen Toure for 22-yards. The Comets’ went for two to try and tie the game, but failed to convert as they trailed 14-12. Just before halftime, Classen SAS scored again when Hardeman found Green as the Comets took an 18-14 lead into the halftime break.

After recess, both defenses locked things up in the third quarter as nobody scored and Classen SAS took the 18-14 lead into the final frame. More fireworks ensued in the final 12 minutes as Northwest Classen re-gained the lead when Wilkinson found wideout Xzavier Nicholson for a 30-yard touchdown pass. The Knights converted the PAT to take the 21-18 lead.

The Comets’ scored with 4:14 left when Hardeman connected once again with Green to give Classen SAS the 24-21 lead. Northwest Classen was driving down the field on their final possession of the game, before CSAS’s Green picked off Wilkinson to seal the victory for the Comets. Classen’s Elijah Green was named the MetroTech OKCPS Player of the Game after finishing with two receiving touchdowns and the game-winning interception.

“I told the guys at halftime we just can’t be timid.” said Classen SAS head coach J Dee Marinko postgame. “I’m really proud of the way we battled tonight. We turned the ball over a few times but our guys showed grit and determination to finish that game. I’m glad we have playmakers like Elijah to help us close out games.”